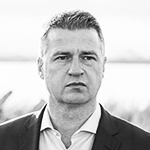 Full Name
Jóhannes Stefánsson
Job Title
Storyteller
Speaker Bio
Jóhannes Stefánsson has over 20 years of experience in the fishing industry worldwide and close to ten years in Africa. From 2008 to 2016, he worked on land with various projects in Africa for an Icelandic fishing company. In Africa, he lived in two countries; Morocco where he worked as General Manager and in Namibia as Managing Director. He left the company he worked for in July 2016 and later became whistleblower to expose corruption and wrongdoing. Stefánsson has worked on land as factory manager, production manager and factory foreman in fish factories in Iceland, seasonal periods in Norway and Denmark, and one year in Morocco as Production Manager. Stefansson was a fisherman for almost 10 years, mainly in East Russia, South Indian Ocean and West Africa.

Stefánsson is the 2021 winner of the WIN WIN Gothenburg Sustainability Award.
Speaking At
A personal story told from the frontline