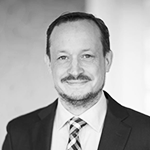 Full Name
Daniel Eriksson
Job Title
CEO
Company
Transparency International Secretariat
Speaker Bio
Daniel Eriksson is the CEO of Transparency International’s Secretariat in Berlin. Daniel joined the Secretariat in January 2019 as Head of Technology and oversaw Transparency International’s work on the role of emerging technologies in corruption. Prior to his appointment as CEO in April 2021, Daniel served as an Interim Managing Director of Transparency International Secretariat for a year.
Daniel brings with him a wealth of leadership experience in both the private and not-for-profit sectors, developing and implementing strategy for multi-country teams in a variety of sectors. Daniel has been an employee with the Swedish government, the United Nations, the European Commission, civil society organisations and, in recent years, in leadership roles of publicly listed corporations. Notably, he was the country manager for a multinational corporate security services firm in India which provided services, including investigations into suspected corruption.

Having started his career as a military peacekeeper in the conflict in former Yugoslavia, Daniel was inspired to work in the humanitarian sector. Subsequent work in sustainable development in Africa, Asia and the Middle East redirected his focus towards corruption as an obstacle to human development. He is a passionate anti-corruption advocate and a big believer of the role of technology in global efforts to end the injustice of corruption.